Currently, Trevor Noah is juggling his duties as host of The Daily Show with live tour dates in North America but eagerly awaits the return to the country of his birth. PHOTO/AGENCIES 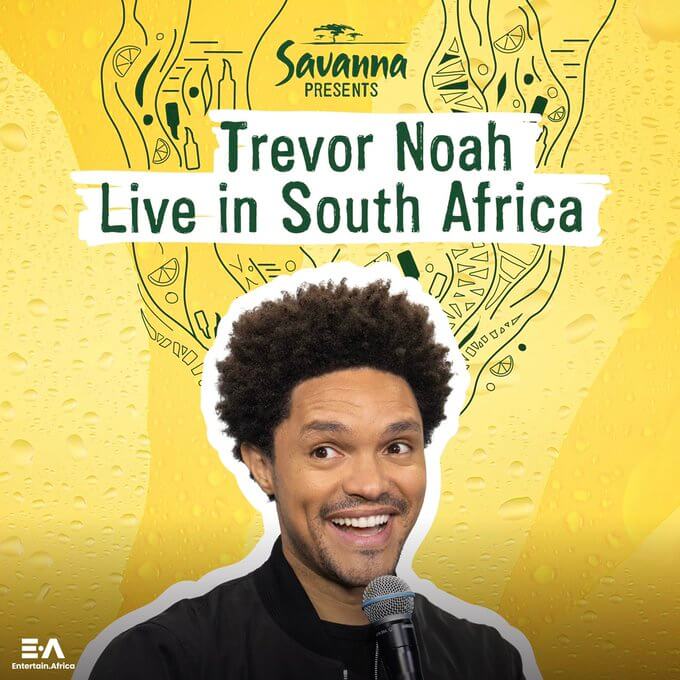 At the moment, Trevor Noah is juggling live tour dates in North America with his TV hosting duties at The Daily Show, but he can’t wait to return to his homeland soon.

Trevor Noah said the following about his upcoming tour in South Africa in 2023: ”I’ve been away from Mzansi stages for too long, and so much has happened – I’m excited to be back in front of a home crowd.”

When asked about his South Africa tour in 2023, Trevor Noah replied: ”I’ve been away from Mzansi stages for too long, and so much has happened – I’m excited to be back in front of a home crowd.”

Eugene Lenford, Marketing Manager at Savanna Cider, said in a press release that Savanna is excited to welcome Trevor Noah back home.

“We believe comedy is a human right and that South Africans’ superpower is our ability to laugh in the face of challenges. Our purpose as a brand is to uplift and unite our nation through humour.”

“We knew that bringing Trevor back home would show just how far we are willing to go for this industry and, naturally, our community. Siyavanna South Africa, we see you.”

‘Trevor Noah Live in South Africa’ tickets will go on sale to the general public starting at 09:00 on Tuesday, 27 September 2022. You can purchase them by clicking HERE.

South Africa!! I’ve teamed up with @SavannaCider for 12 shows from 31 AUG – 15 SEP 2023. Tickets go on sale tomorrow at 9am local, and you can find them at https://t.co/L7bDKHCHyQ – Can't wait to come home!! 🇿🇦 #SiyavannaSA @entertain_afric pic.twitter.com/LpytJmk4F0

If you’re wondering when tickets go on sale… it’s TODAY! But… to be fair, they are also on sale for those that weren’t wondering as well! 🙌🏾 😁 https://t.co/OCUM8lHIlI pic.twitter.com/XHF0DkeUwj

Trevor Noah: A quick look at his life and career

The Hollywood Reporter named Trevor Noah one of the 35 most powerful people in New York Media in 2017 and 2018. He has won a Primetime Emmy Award from eleven nominations. Time magazine named him one of the 100 most influential people on the planet in 2018.

As a South African born in Johannesburg, Trevor Noah launched his career in 2002. During his time with the South African Broadcasting Corporation (SABC), he held several hosting positions and was the runner-up in Strictly Come Dancing in 2008. He created and aired the late-night talk show Tonight with Trevor Noah on M-Net and DStv from 2010 to 2011.

Noah became a Senior International Correspondent for The Daily Show in 2014 and succeeded Jon Stewart as host in 2015. He published an autobiographical comedy book in 2016, Born a Crime. His responsibilities include hosting the 63rd Grammy Awards and the 64th Grammy Awards in 2022, as well as the White House Correspondents Dinner in 2022.